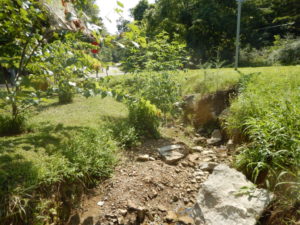 Project Overview Squirrel Creek running through Peek’s Park is a prime candidate for restoration. Several of the streambanks are eroding at the toe of the bank, contributing sediment and nutrients to the stream, and preventing a healthy stand of native vegetation from being established. Also, where the site is stable, the vegetative cover is filled with non-native and some invasive species of plants. Squirrel Creek to the West Fork of the White River (WFWR), is located at approximately Latitude -94.135179°, Longitude 35.29992° in Washington County, Arkansas in the community of Winslow. The WFWR flows into the White River which forms Beaver Lake, the primary drinking water source for over 450,000 people in Northwest Arkansas. The WFWR is one of the largest contributors of sediment and phosphorus loadings to Beaver Lake. Extensive watershed assessment and planning has been conducted on the WFWR due to its importance as a natural area and 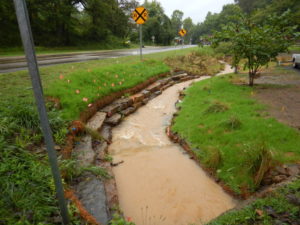 one of six major tributaries that flow to NW Arkansas’ primary drinking water source. Although relatively minor, this small stream has an impact on downstream sediment and nutrient loads. Stabilization of this site will reduce contaminants entering the waterway, enhance aquatic and terrestrial habitat, and improve the aesthetics of the park. The creek runs approximately 260 feet along a portion of Highway 74. Most, if not all, of the stream corridor falls within the Arkansas Highway and Transportation Department (AHTD) Rightof-Way for Highway 74. AHTD had to be contacted and provide approval before undertaking any action shown in this plan. The reach runs between a culvert under Peek Ave. (upstream) and out through two culverts under Highway 74 (downstream). At the downstream end of the reach, a drainage pipe from the southeast empties into the creek. The contributing watershed area to the reach is 0.15 mi2.